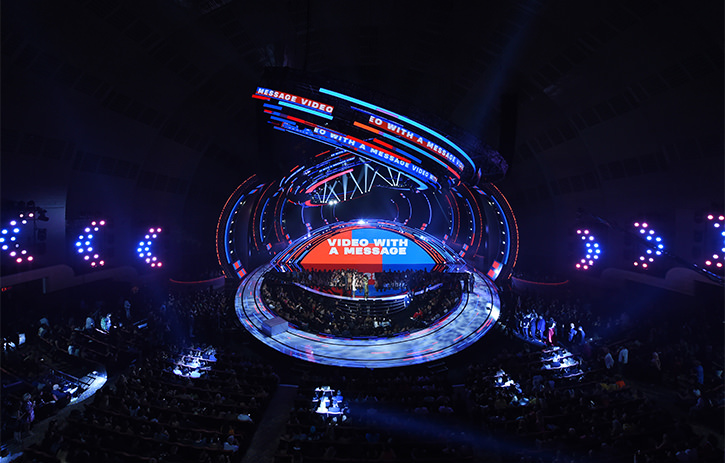 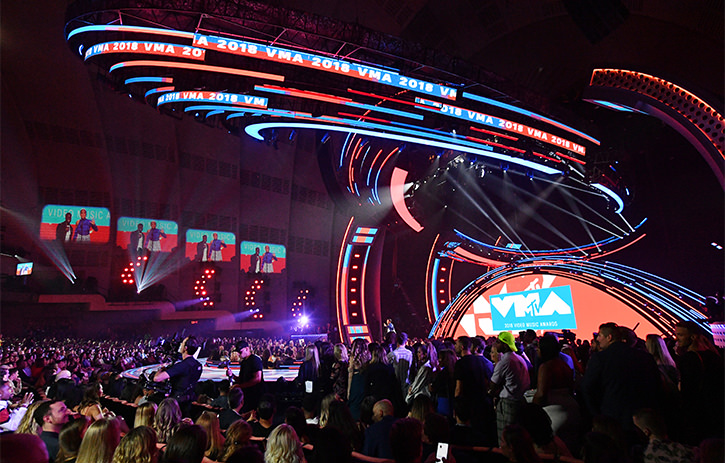 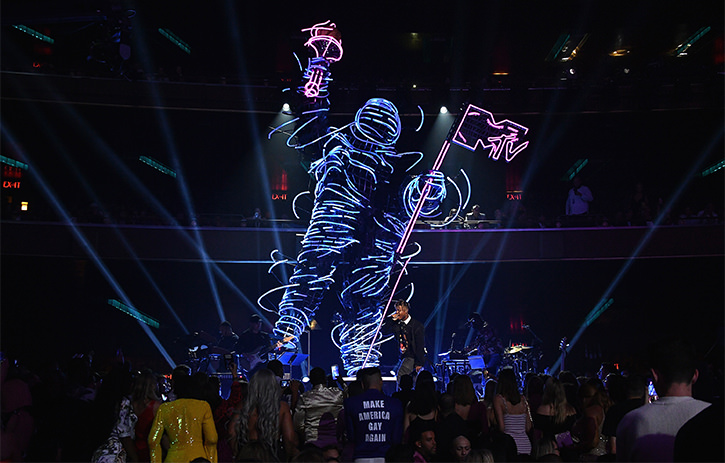 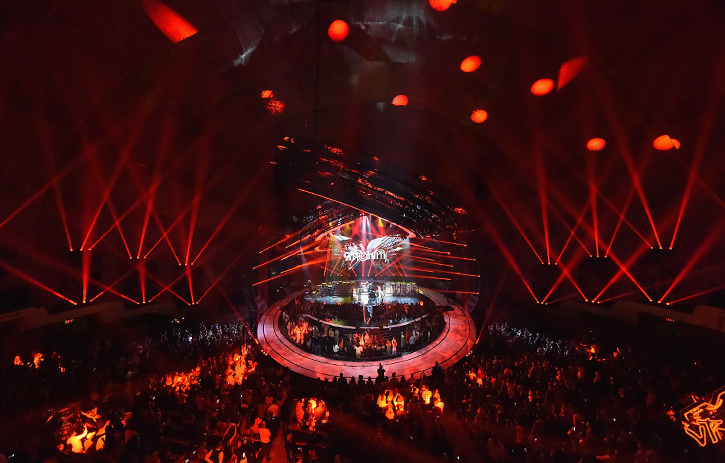 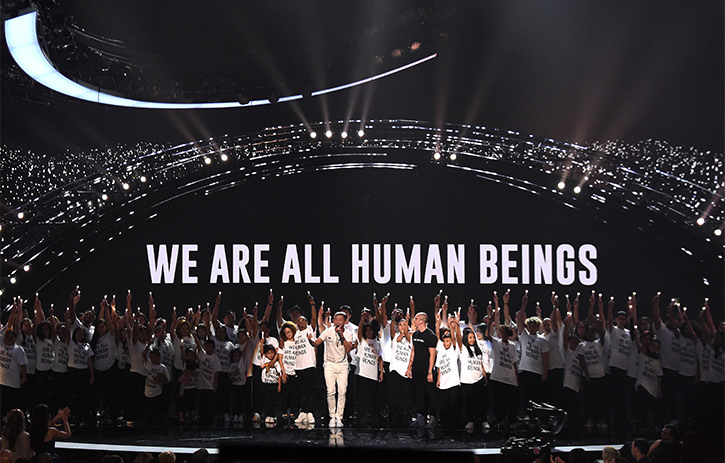 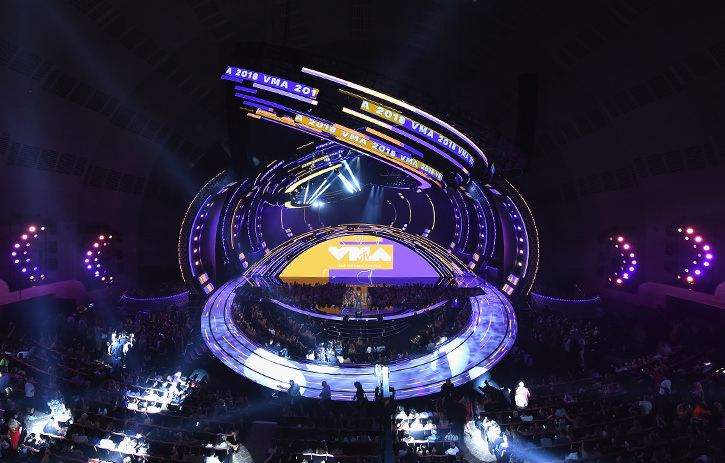 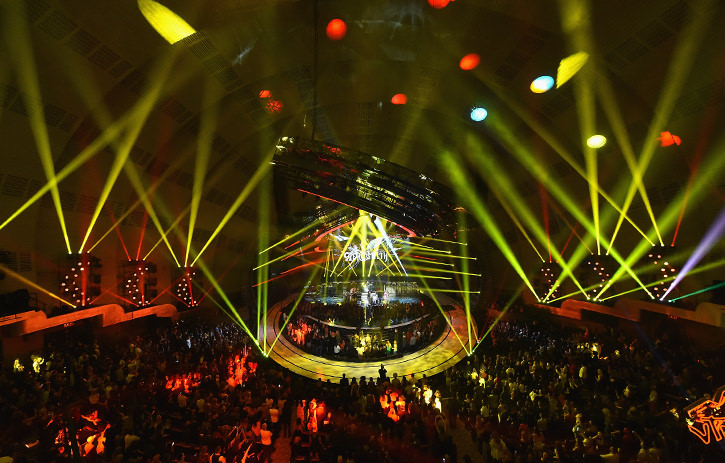 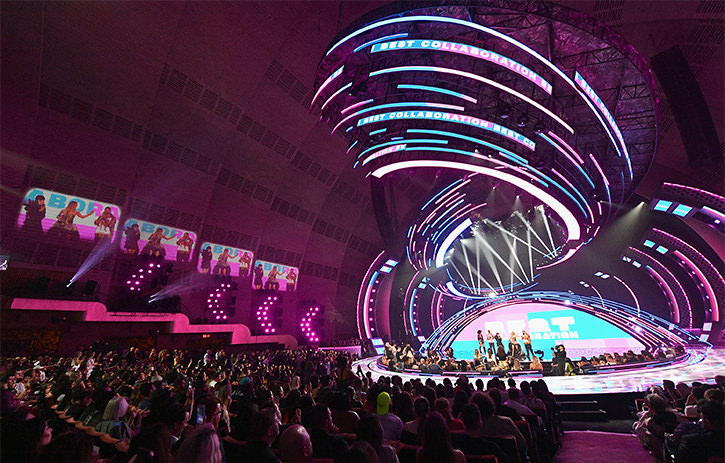 The MTV Video Music Awards made a big splash at the Radio City Music Hall in New York, airing live for the twelfth year with 4.87 million viewers tuning in. Designer Julio Himede hit the sketchbooks creating a design for the show that had fans raving. With a design plan in place, Himede brought on the ATOMIC Set Construction team to assist with the build and fabricate his vision into reality.

The scenic elements on ATOMIC’s plate included the main stage scenery as well as the moon person in the house. Creating a floating appearance, a metal constructed halo hung above the stage and over the house with fully integrated video product and lighting. To continue the flow of the halo design, a 60′ custom built passarele came out into the house creating a unique section of the stage. Included in the flooring were custom graphics and integrated infrared sensors for augmented reality that was provided by Trackmen. This augmented reality shined during Ariana Grande’s performance, expanding the set beyond the video wall to encompass the entire stage and house.

Hanging out in the house stood a 27′ tall pixel controlled LED moon person. Weighing in at about 3,000 pounds, the sculpture took on the role as the house stage, providing additional shots for the cameras while bands were switching over on the main stage. Also assisting in performance switchovers was the close down; a large curved metal arch with integrated video panels that flew in and out of the stage to allow for band set ups.

A huge thank you to our awesome client and partners on coming together and bringing team ATOMIC to the table on this spectacular build: Viacom, Art Director Matt Steinbrenner, Scenic Designer Julio Himede, Laura Frank with Luminous FX, VER, United Staging and Rigging, Versatek, Trackmen, and Bassett Industries.